From Space Exploration
Jump to navigation Jump to search 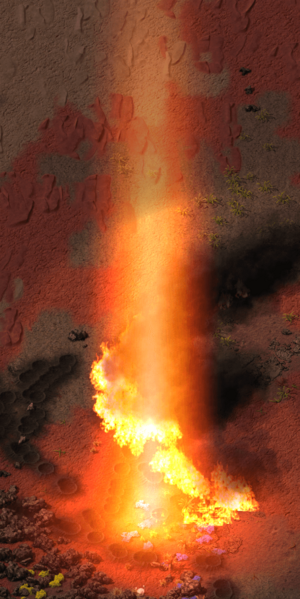 Also known as Coronal Mass Ejection, is a natural phenomenon that takes place in Space Exploration. The first CME is triggered at the start of the game on Nauvis. The second will take place exactly at 48 hour mark of the game on Nauvis. Each subsequent event will trigger from 12h to 24h time frame from the previous event, the same applies to any game that recently updated to version that has CME and is past the 48h hour mark. After the 48h mark guaranteed CME event on Nauvis, any surface that player has discovered in Universe tab can be target for CME. The event can cause severe damages to all objects on the surface, player buildings or biter nests. Players can harness this power into a weapon in later research via Energy Beam


1) CME can cause large fires, this will result in burnt trees, however it does not generate any pollution.
2) CME last 2minutes.
3) The mechanic works by generating a number beam randomly, similar to one from energy beam emitter, depending on the size of the map revealed by the player (your pollution also reveal map). Larger revealed surfaces will generate more beams, however the probability of a player entity being hit is relatively the same.
4) The next CME as well as time and location before its arrival is show in Informatron -> Energy Beam tab.
5) The event can be stopped by using Umbrella building and providing it with sufficient power during the two minute time frame. If the Umbrella fails, gets destroyed, or is removed, all beams that should have otherwise been stopped will spawn immediately. There is no partial defense to this mechanic.
6) CME does not always hit player entities and there is a chance player can survive it unscathed.


This mechanic can be altered in settings via changing its interval or potential even turning it off.

Retrieved from "https://spaceexploration.miraheze.org/w/index.php?title=CME&oldid=734"
Cookies help us deliver our services. By using our services, you agree to our use of cookies.