Which space science should I start with once I get to space?[edit]

Energy science is a recommended starting point. It is relatively simple to set up, and provides immediate benefits to your bases, such as space solar panels for your space base, and beacons for your base on the surface.

Material science is about as easy to set up as energy science, and should be worked on as soon as you get energy science going, so that you may take advantage of their combined simulation. The main reason to start this after energy science is simply because it lacks benefits as immediately useful.

Astronomic science is straightforward, though it requires significantly more thermofluid infrastructure. Compared to the other sciences, however, it has little that would be useful in the early stages of space.

Biological science is the most complex, as it requires a biosludge loop to maintain properly, which is covered in a separate section of the FAQ. It is recommended to tackle this once you have a decent rocket infrastructure for item and fluid imports.

Many space science components now require exotic resources, not found on Nauvis, and some of those exotic resources depend on *other* exotic resources to be processed to a usable state. Therefore, the best starting space science for you may depend on what your exploration has revealed. One science, Astronomic, can be made entirely using materials made on Nauvis, though more slowly and expensively than if supplied with exotic resources. Astronomic Science Pack 1 gives access to level 3 Rocket Cargo Safety / Rocket Reusability / Rocket Survivability which can help cut down on transit costs as you spread from planet to planet. It also leads to the technology "Zone Discovery 1" which will find new locations for the Universe Explorer (accessed by U, by default). See also Navigation Satellites.

Astronomics and Beryllium will significantly reduce your launch costs. The first few levels of rocket reusability will pay for themselves in no time, and getting beryllium will allow you to use a new Cargo Rocket Section recipe that yields 2 instead of one, effectively cutting your rocket cost in half (minus fuel, of course). Beryllium needs Cryonite to process, and both need water. If luck is with you, you might find a planet/moon with both ores and water. Otherwise, if you've got a planet with cryonite and water, you can send both ice and cryonite via delivery cannon. Or if all else fails, you can mine water ice in the asteroid belt.

After that: energy appears most immediately useful (flat solar panel 2 is a cheap upgrade, also of note is the holmium cable recipe for Processing Units, and Tesla gun is good fun), but Material science has a lot to offer as well (Personal Roboport 2, thruster suit 2, also notice the Iridium Heat shielding recipe ) and biological coming in last (passive personal upgrades are neat, but don't offer enough to prioritize them; Spidertron is nice, but requires material science as well; vitamelange is not useful outside of biological science)

What is useful to take in the first rocket launch?[edit]

For your first rocket launch, you will mainly be setting up scaffolding, and research, as such you will be taking up lots of science. personally, i recommend taking at least 2k of each science you will be using, in addition, you will need to take up space science labs, and 6 times as many of the best productivity module you can as you have space science labs, as to reduce the number of science packs you need. take 6 extra modules if you are going to navuis orbit.

secondly, take up solar panels, about 2-4 stacks, for power, as it is always considered day in space and so you always have solar power, however, the further away from a star you go, the less power the panels make. you may want to take some accumulators so that you can store power for peak usage. thirdly, take up resources such as LDS, heat shields, a small amount of iron, some copper, a lot of steel, plastic, even take up some assembler 2's etc. this is so that you can make the expensive machines in space. you will also need to take up inserters, and a landing pad so that you dont lose your next launches. as well as power poles and roboports, as well as repair packs to clean up the damages from landings. remember that you can take important stuff in your inventory, as to not lose any of it.

For version 0.3.xx: Upon launch of your first satellite from the Satellite rocket silo, you are notified "The Satellite discovered some orbiting space platform. Open Universe Explorer [U], select Nauvis Orbit, and click View Surface. There might be useful stuff up there." 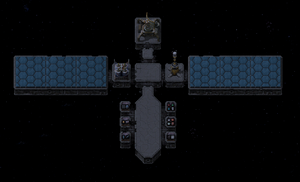 Retrieved from "https://spaceexploration.miraheze.org/w/index.php?title=Strategies&oldid=748"
Cookies help us deliver our services. By using our services, you agree to our use of cookies.