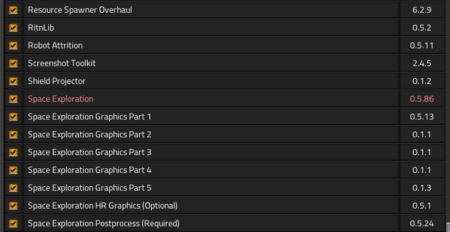 If Space Exploration appears in red, you have an incompatible mod. (Here: RSO)

You can confirm that by looking at Space Exploration in your mod list. If the name is in red like the picture on the right then you have a mod incompatibility. Compare your mod list with the "conflict" mod list linked above and disable any that are incompatible. You will need to "Apply changes" to restart Factorio before you can see if the name still appears in red.

Which mods are recommended with Space Exploration?

Why is the Bob's modules mod incompatible?

At the current time of writing, SE has its own system of modules that does not work with bobs, due to conflicts, Bob's modules will cause crashes.

In the future, there may be a fix or an option to disable the modules but that is unlikely.

Can I play multiplayer with everyone starting on different planets? Can I play PvP?

PvP and multiple forces is possible, but very experimental. Here are posts from people who have tried:

I finally was able to create my k2 + se multiplayer Map with 6 different teams (pvp scenario preset but a bit modified by commands). I know there is this command given:

But when you create a game and use this command to create different forces for your friends you don't have this nice team indicator at the top left where you can see who is online in which team. So create a pvp scenario Map with the amount of teams you need. As an example:

When people join your server let them join over the normal team selection in their team of choice.
Now use the command I mentioned earlier ago and create a new planet with a new spawn for each team and use the exact team name for the force name:

Now move each player into the new force, after that both players have to die to spawn on their new planet:

Now every team has a own planet and you have that nice factorio team display. Maybe thats known but I saw a few people asking how to create this so maybe this can help a few people

Why is it that we cannot place productivity modules in any of the space structures?

Can I use construction/logistic bots in Space?

What do I need to take in the first rocket launch?

Below is a list for what you need; but first, here's an explanation of why you need those things. Note that this may change as SE development continues; the list here is intended for SE version 0.5.

If it's your first time playing SE, your best bet is to go first to Nauvis orbit. You can return from orbit to Nauvis with just the space capsule that is part of your cargo rocket, so you won't need to take the materials to build and launch a second rocket.

The first thing you'll want to do is build a larger platform with scaffolding, place solar panels to generate power, and start doing research that requires the basic (ground-constructable) sciences plus rocket science. It is always considered day in space, so solar power is always on. You may want to take some accumulators so that you can store power for peak usage. Also bring a landing pad, so that your future rockets will have a proper place to land.

In order to make and use rocket science you need not only the ingredients for it, but also the ingredients to build several required buildings that can only be constructed in space (mainly in space manufactories). The rocket science ingredients that you can make before going to space are rocket fuel, scaffolding, solar panels, vulcanite blocks, red and green circuits, copper plates, iron plates, glass, water, petroleum gas, lubricant, and substrates. It also requires empty barrels, but you'll have plenty of those from shipping the necessary fluids, so you won't need to bring empty barrels (nor build them in space).

The new buildings you will need to make in space include space manufactories, supercomputers, decontamination facilities, hypercoolers, radiators, and space science labs. You'll only need a few (in some cases one) of each in order to get started, but this means you need to bring all the ingredients for those buildings. Here you could just bring a lot of basic materials and build things in space, but it's much more efficient and convenient to bring higher-level intermediate products directly (doubly so since productivity modules don't work in space). The materials for constructing the buildings you need include LDS (low density structure), heat shielding, electric engines, more circuits (including blue) steel plates, iron plates, copper plates, bricks, space assembling machines, and fast inserters. Optionally you could bring some simpler intermediates like pumps, and copper cables, but those are simple enough to just make a few in space when needed.

Finally, you'll want to bring 6 productivity modules of the highest tier you can produce (should be tier 2 or 3) for each space lab, in order to get the most out of your initially limited rocket science production.

Remember that you can use your own inventory as well as the cargo rocket slots. Be sure to put on a thruster suit (ideally outfitted with power generation, jetpacks, and personal roboports) and pack a stack or two of life support canisters.

You WILL need the following:

What to do once I reach space?

Other things to do once you reach space include:

Why am I getting a "Cannot connect systems with different fluids" error when everything seems fine? 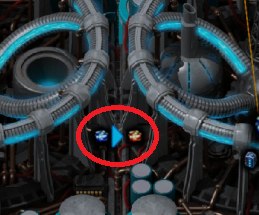 SE's buildings are made in a way that you can often rotate them to get what you need: 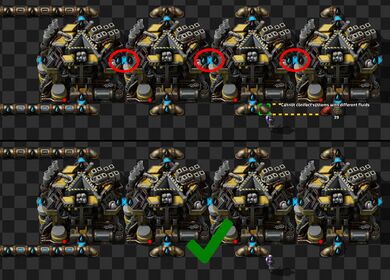 Is there a way to keep generating biosludge in space?

Yes, there is a positive feedback loop using biomass. For a single cycle of the biosludge loop:

40 contaminated biosludge can be recycled to give back 39.6 biosludge. After recycling, the total return per loop is 99.6.

These calculations ignore the extra biosludge that might be obtained from recycling the contaminated cosmic water, since it's a negligible amount compared to the 99.6 return.

How does spaceship integrity stress work?

If 2 containers are removed for a total of 8 containers the stress would drop to 192.

If 2 more containers are removed for a total of 6 containers the stress from containers would drop to 144, but the total stress would be 190 from the spaceship size.

After a Factorio/"Space Exploration" mod update, my game freezes. What can I do?

Can I use this mod in Linux?

Can I use my Factorio blueprints?

My save file is too large and saving/loading takes forever. What can I do?

How can I resolve performance issues?

Retrieved from "https://spaceexploration.miraheze.org/w/index.php?title=FAQ&oldid=1610"
Cookies help us deliver our services. By using our services, you agree to our use of cookies.